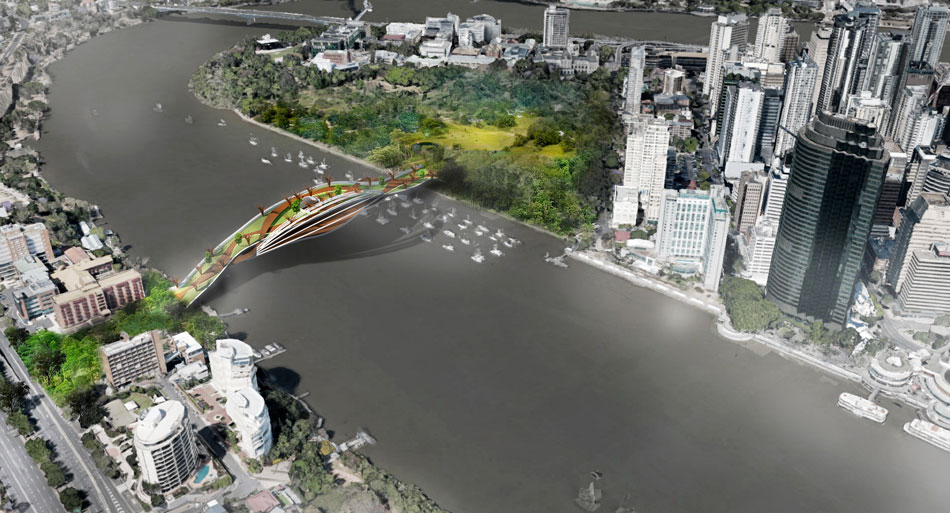 Brisbane, unashamedly a river city that is sliced in half by the mighty Brisbane River, not only needs more bridges but needs smarter, greener bridges.

By international standards, it is quite evident that Brisbane, a city of 2.5 million people lacks river crossings of any kind, bridges or tunnels.

Our bridges, whilst practical are neither aesthetically functional nor internationally ‘iconic’ in design. They do the job of a bridge, getting you from one side of the river, to the other.

The Brisbane City Council has announced plans to build four new green bridges, (four because a bridge across Breakfast Creek is not a Brisbane River crossing) at Kangaroo Point to the CBD, Toowong to West End, St Lucia to West End and Bellbowrie.

This is not only a fantastic opportunity to connect Brisbane, but it’s also a way to grow visual architectural drawcards of Brisbane to drive tourism and showcase ‘subtropical bridge design’.

Green’s Councillor Jonathan Sri has echoed the sentiment about architecture and design of bridge infrastructure saying that bridges don’t just have to be transport links from one side of a waterway to the other.

“They can also double as useable public spaces in their own right. If we’re going to build a bridge anyway, we might as well maximise its usefulness for recreation and leisure.” – Councillor Jonathan Sri

Engineering wise, it is very possible for these new bridges to feature parks, trees, chill-out zones and even grassy areas with views over the river. This is all possible through design and the client, the Brisbane City Council demanding innovative architecture.

Of course, the budget bottom line will come into play, like it always does, but we need to remember that these bridges will be here longer than anyone reading this article.

In 100+ years, they will still be here. The domestically-iconic Story Bridge is around 80 years old and likely has another 50-100 years of service.

These bridges need to be future-focused and showcase not world-class but world-leading subtropical architecture that we have not yet seen before. The possibilities are endless.

What are subtropical bridges?

According to Councillor Sri, he would like to see plenty of roofing/shade, comfortable places to stop and sit where you can watch the river or watch other passersby, nooks for buskers, lookouts for photo opportunities, and adaptable open spaces with access to electricity that can be used for outdoor theatre or pop-up gigs.

Lord Mayor Adrian Schrinner said he had a vision for a cleaner, greener and more active Brisbane and these new bridges would tackle traffic congestion by improving cross-river public and active transport connections.

“These five bridges will transform Brisbane and make us an active, healthy and better connected city.

“My very first act as Lord Mayor was to announce this plan and I am now handing the planning over the people of Brisbane as we want to hear the community’s thoughts on the proposed alignment of the bridges.

“The community is crucial in the planning and delivery of these five bridges, as this infrastructure will transform the way residents and visitors get around Brisbane.” – Lord Mayor Adrian Schrinner on Council’s plan for Green Bridges

The Brisbane City Council are planning to fund at least two-thirds of the new bridges and will seek contributions from the State and Federal Government for the balance of the funding.

Community consultation has officially closed to the public for the City Council’s new bridge designs. It is now up to council to prove that we’re architectural leaders and not just concerned about A-B efficient design.