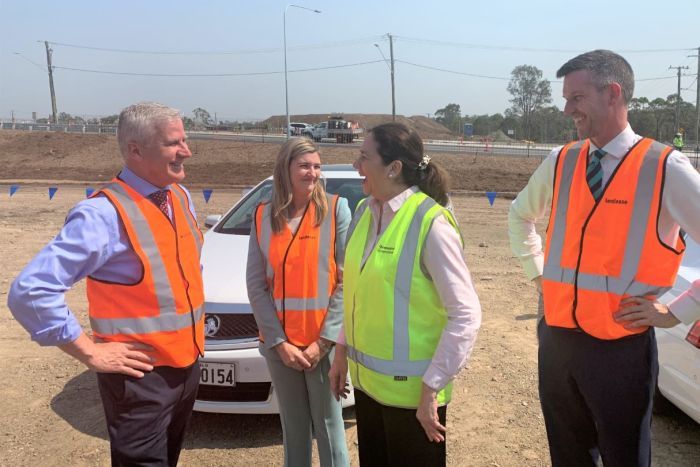 A raft of major infrastructure projects across Queensland is set to go ahead, after a surprise deal was reached between the state and federal governments.

Despite years of bickering, the two parties have finally reached an agreement that will see about $1.9 billion worth of funding released in the short term, with at least $1.3 billion from the Federal Government.

An exact timeline for each project is yet to be released but Premier Annastacia Palaszczuk called the historic deal a "huge win".

"I have always said we work best when we work together and this proves it," she said.

"We have called for a better deal for Queensland and the Prime Minister has listened.

"Thousands of people are at work on region-shaping projects like the Mackay Ring Road, the Houghton River Bruce Highway upgrade south of Townsville, the Rockhampton Northern Access upgrade and Cross River Rail.

"The challenge for all governments is to plan for the next wave of projects that will continue to sustain jobs and underpin confidence in the economy."

The deal puts an end to a long-running campaign by the Queensland Government over the Federal Budget in April, which saw Queensland ministers constantly criticising the Prime Minister citing big infrastructure spends in New South Wales and Victoria.

Queensland Transport Minister Mark Bailey said the arrangement was particularly successful because it involved a shift in a stalemate regarding the Inland Rail project.

"Inland Rail presents an opportunity to move more freight onto trains and take trucks off the roads," he said.

"This deal also prioritises planning for the passenger rail services that will be needed to serve growing parts of South East Queensland, like the Salisbury to Beaudesert rail link."

Prime Minister Scott Morrison said the Federal Government had arrived at the deal after careful consultation.

"There are big infrastructure and transport tasks here in Queensland and it's important that governments of whatever political persuasion work together to get these projects done on the ground," Mr Morrison said.

"This is the time to get this stuff done.

"We've painstakingly gone through this process of identifying the projects that could be brought forward, the scoping of works, the scheduling of works, the additional funds that may be required, the movement in things like materials prices and things of that nature and we've been able to arrive at this package of some $3.8 billion [nationally].

"So we've been working on this since the election and you don't just rush in to spending $3.8 billion, spraying it around out of a hose, you actually do it carefully and in consultation."

Ms Palaszczuk said the projects would provide a major boost to the economy.

"This is a clear signal that we can sit down, we can work through things in the best interests of the people of this great state," Ms Palaszczuk said.

"I know that we want to make sure that we continue to build the economy and get people out there into work and what this money means, this accelerated money, it means that we can get on with the job of making sure that we have the key infrastructure that we need right across Queensland.

"It's not just for the south-east. This package includes money across regional Queensland whether it's Cairns, Rockhampton, Mackay, the light rail on the Gold Coast which now means we can get it shovel ready for next year."

"The biggest issue facing Queensland is water security and drought and both levels of government are simply not doing enough," Ms Frecklington said.

"Our regional communities are hurting. We need a stimulus package for the whole of Queensland to get Queensland working again.

"I've championed many of these projects, and you've heard me do so, but this is long-overdue announcement, particularly by Annastacia Palaszczuk.