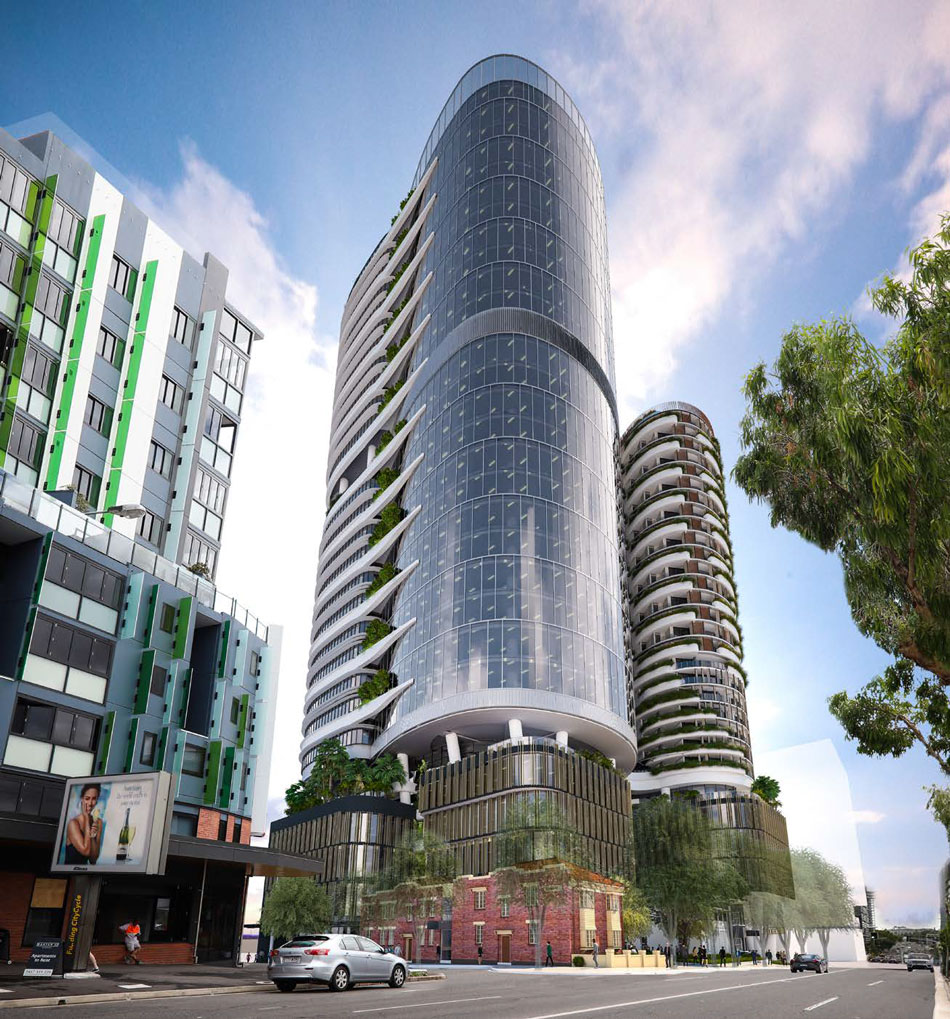 A development application has been submitted by the Queensland Teachers Union Health Fund for the permit to construct a sizable 33 storey two-tower mixed-use development for 17-25 Baxter St, 426-442 St Pauls Tce and 18-30 Misterton St, Fortitude Valley.

The proposed development lives true to the term ‘mixed-use’ with a broad range of uses planned. It is a 5,207sqm consolidated parcel of adjoining properties fronting Baxter Street, St Pauls Terrace and Misterton Street.

Tower 1, the tallest 30 storey tower comprises of commercial space and has a total GFA of 43,513sqm. The shorter tower 2, which is also 30 storeys in height, is residential in nature.

This tower comprises of a mix of retail, hotel, x111 short-term accommodation units on levels 7-12 and x148 residential apartments across the remaining 18 levels of the tower.

A large urban commons/plaza space is planned between the towers for guests and leads to a hotel pool deck on the top of the podium in an open-air section of level six.

A five-level podium is proposed including an elevated three-storey commercial podium that wraps the plaza space and highlights ‘re-activated’ heritage buildings at the front.

The podium would also house retail including a metro sized 1,155sqm ground floor supermarket, a childcare centre, shops as well as bar/hotel, food and drink outlets.

According to the architects, Cottee Parker, the ground floor level features adaptive re-use of the heritage buildings primarily for dining areas, which are surrounded by a plaza space and cross-block pedestrian links.

The proposed development adds 1,306sqm of space to the public realm in the form of an urban commons (including a plaza space), landscape planting areas and additional pedestrian connections.

According to the development application, the proposed pedestrian connections include a cross-block link connection celebrating the former ‘Surman Lane’ by enhanced pedestrian use (and aligning with Hadlow Lane on the opposite side Baxter Street), as well as an additional 2.5m wide path under future volumetric easement along the Misterton Street frontage.

Two buildings on site (premises at 426 and 434 St Pauls Tce) are identified as ‘Local Heritage Places’ – private residences and flats built between 1880s and the 1930s.

Adaptive re-use of the heritage buildings is proposed in a manner that is said to enhance public access to and awareness of those buildings. Some external elements of the buildings are proposed to be removed.

Those elements are, for the most part, later add-ons that face internally to the subject site, but were once flanked by a neighbouring building and not appreciated by the public. – Development Application

The Abbeyville front verandah has previously been closed in, but will be restored to its original design.

The design intent for the heritage buildings is that they are restored to identify the core architectural features of the buildings in their respective eras, while also being utilised for active uses (dining/retail) that generate pedestrian access to and through them; so that they can be appreciated in the daily function of the plaza space. – Development Application

A key component of the design by Cottee Parker was the separation of the tower into two separate buildings and the introduction of curves to the building edges.

According to the architects, both these attributes will significantly reduce the impact of the bulk on the skyline, while the separation between the towers will ‘reveal’ an urban sanctuary.

While the towers will accommodate different uses, they will both live outwards from this space, with circulation spaces living inwards to the sub-tropical vertical garden. This space will allow both buildings to breathe while offering easily accessible connections to nature, which will have a significantly positive impact on the livability of the buildings. – Development Application

The site which is owned and currently used by the Queensland Teachers Union Health Fund was valued in June this year for $13.5 million.

The development application for this project, available to view on Brisbane City Council’s Planning & Development Online is A005317843.