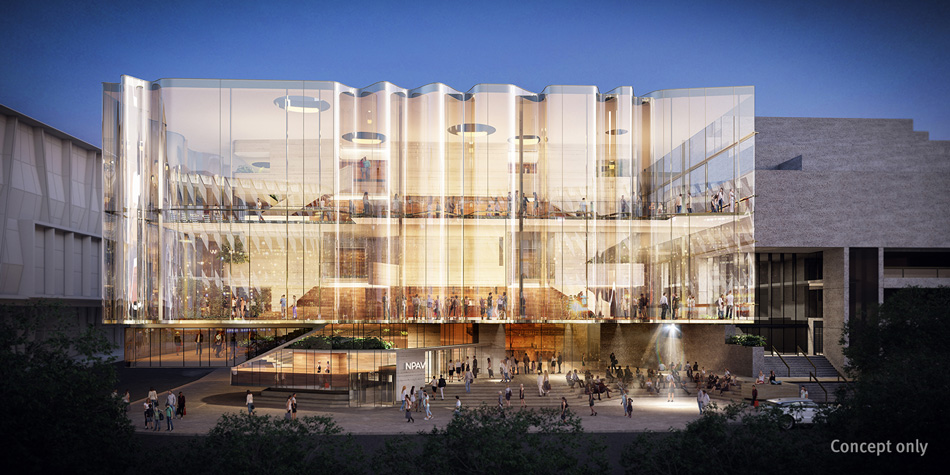 The Queensland Government has unveiled the concept design of the $150 million new theatre to join the stage at the Queensland Cultural Centre at South Bank.

The new theatre will be constructed at Queensland Performing Arts Centre and will deliver a new world-class facility for the state, supporting more than 100 jobs during construction and more than 40 new full time jobs upon completion.

“My Government’s commitment of $125 million towards the $150 million new theatre is the largest investment in Queensland arts infrastructure since the Gallery of Modern Art.

“The new venue will make QPAC the largest performing arts centre in Australia.”

“The heritage-listed Queensland Cultural Centre is one of our state’s cultural icons, attracting 7 million visits in 2017-18,” Ms Trad said.

“QPAC’s popularity, as one of our premier cultural and tourism destinations, will only continue to grow with the construction of the new theatre.

“It’s expected to deliver capacity for an extra 260 performances annually with the potential to welcome an additional 300,000 visitors every year.

“The new theatre’s innovative design will ensure the Cultural Centre continues to be a much-loved destination for locals and visitors, and that’s good news for jobs and our cultural economy.”

Minister for the Arts Leeanne Enoch said the winning design was selected following an international design competition and a rigorous evaluation process.

“The design also importantly recognises First Nations Peoples and the cultural significance of South Bank, with inspiration in the design drawn from the Brisbane River as an important meeting place and a place for telling stories.”

Ms Enoch said the design would be guided by the Conservation Management Plan to fit with the heritage setting of QPAC and respect the history of the site.

“I thank everyone involved, including the 24 design teams who showed interest in the competition, and the shortlisted teams who developed concept designs.”

Michael Rayner said Blight Rayner + Snøhetta were honoured to be chosen to design the most significant cultural project in Brisbane in over a decade.

“The building will glow by night and sparkle by day with just a glimpse of the glass visible from the city side,” Malcolm Middleton said.

The Blight Rayner-Snøhetta design proposes a ‘solid’ core containing the theatre which forms alignments with QPAC’s grid, and extends cantilevered foyers beyond the boundaries, enveloped in undulating glass walls.

“An early thought was about abstracting a curtain and creating a sense of the whole building as theatre. But we also became inspired by a poem by Indigenous Australian artist Lilla Watson which reads”:

Beneath the Southern Cross, and the canopy of the rainforest along the river bank, the Kurilpa, which still survives here, dug out its nests and left its tracks…they looked out over the river, the ripples on the surface stirred by the wind and tidal surge, and the fish swimming in the water.

The idea expanded to encapsulate notions of the Brisbane River, and of dance, symphony and narrative. Rayner’s partner Jayson Blight said the design respects the Gibson architectural legacy in multiple ways including its overall simple cubic form, retention of original fabric and reflecting its spatial hierarchy and limited material palette.

A key initiative was positioning new studios under the theatre where they are visible to the streets for performances, potentially opening up to the pubic realm. Rayner commented, “This is about engaging the arts with everyday public life, not just relying upon formal theatre performance”.

QPAC Chief Executive John Kotzas said through the new theatre, QPAC has been given the opportunity to reimagine the future for its audiences.

“The winning design will support us in expanding our programs, broadening our reach across Queensland and developing new artists and creatives,” he said.

Another key milestone in the development of the new theatre has also been reached today, with the shortlist of tenderers for Managing Contractors: Multiplex Constructions QLD Pty Ltd, Watpac, CPB Contractors and Lend Lease.

The winning tender, to be announced later this year, will manage and participate in the design process and manage the construction.